I recently reviewed my DNA test results – I have tested Y-DNA and family Finder with FamilytreeDNA and Relative Finder (autosomal) with 23andme.  I have considered testing with ancestry.com but I am reading too many negative comments which has put me off for the time being.

The names that stand out in my DNA tests are McAllister, O’May, O’Gara and O’Hara including variations on the spelling of those names.

I discovered a web site called www.irishorigenes.com where a Dr Tyrone Bowes states that he could pinpoint a person’s ancestral origins from FTDNA 37 marker results.  He also has a Scottish and English equivalent with a Wesh site in the pipeline.  I decided to purchase a consultation expecting to be told that my ancestral roots were in Scotland with links to Ireland.  So the results were a bit of a surprise.

Dr Bowes suggests that surnames in Ireland can still be found concentrated within the Counties where they first appeared, or in the area where ones ancestors first settled in Ireland. Hence an examination of the Irish Origenes distribution maps for the surnames from my FTDNA results reveals that I have a paternal ancestral link with 2 geographical locations within Ireland. Both McAlister and O’Hara are associated with Antrim in the far northeast of Ireland and since my most recent recurring matches are to McAlisters this would indicate a more recent paternal ancestral link with this area. While the distant matches to O’Garas, O’Mays (May), and O’Haras indicate an earlier ancestral link with Sligo  in the west of Ireland when surnames became common approximately 1000 years ago.

Dr Bowes states that if one has Irish ancestry then an examination of the Irish Origenes Clan Territories of Ireland Map typically reveals a shared ancestry (of the test subject) to prominent Clans or Families that once ruled over one’s Genetic Homeland. An examination of Antrim as it appears on this map reveals that this area was split between Scottish and Irish Clans, see figure below – click to enlarge. 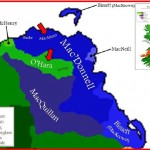 The Scottish MacDonnells (MacDonalds) had arrived in Antrim in about the 14th Century. Their presence in Antrim may have been an attempt to monopolise the lucrative trade in mercenary Scottish warriors known as ‘Gallowglass’ who were employed by Irish Chiefs, Norman lords, and even the English authorities. The Scottish MacAlisters appear to have colonised Ulster at the invitation of the MacDonnells, presumably serving as Gallowglass throughout Ireland. It is known that Sorley Boy MacDonnell gave Kilbane castle in north Antrim to Owen MacIan Dubh MacAllister (Chief of Clan MacAlister) as a reward for their service to the MacDonnell clan. When the MacAlisters took possession of Kilbane castle one of the prominent Gaelic Irish Clans in that area would have been the O’Haras who had migrated from Sligo to Antrim where they had been granted lands by Henry II (1133-1189). My paternal ancestor may have been an O’Hara at the time of the arrival of the MacAlisters in Antrim. One can only speculate as to how the MacAlister surname was acquired by my paternal line, it may have been through adoption of fostering between these neighbouring Clans which were often a means of building good relations between medieval neighbours. It may have been through infidelity or simply the maternal transfer of the surname. Or alternatively an O’Hara may have taken the MacAlister surname and become Gallowglass. The prowess of the Gallowglass was often associated with specific surnames, and having a Gallowglass-surname (MacAlister) would have ensured steady employment.
Only some of the O’Haras had ventured to Antrim in the 12th Century. The majority of O’Haras in Ireland are still to be found in Sligo. An examination of the Clan Territories of Ireland map for North Connaught reveals that the O’Haras dominated lands in what is today known as County Sligo and that their neighbours were the O’Garas. 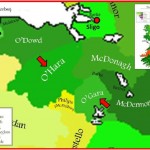 The Clan Territories of Sligo. Medieval Sligo was dominated by Gaelic Irish Clans which included the O’Haras and O’Garas (red arrows). In the 12th Century some O’Haras migrated to Antrim, later becoming neighbours of the Scottish MacAlisters.

Surname distribution and historical evidence show that my paternal ancestry is linked to County Sligo, at the least from the time when surnames became common (800-1000AD). By plotting where O’May, O’Hara, and O’Gara farmers, plus placenames and historical monuments associated with these surnames are found one can see an area emerge that is centred upon the cluster of farmers called May, see figure below. This is an area just east of Tobercurry. 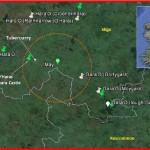 It is within this area that my direct male ancestor lived when surnames became common between 800 and 1000AD. It is in this area that one finds evidence of my genetic relative’s long ancestral links with this area in its monuments, placenames, and in the DNA of its current inhabitants. The O’Gara, O’Hara, and O’May (May) surnames are only a few of the more common Gaelic Irish surnames that arose in this area a full list of Gaelic Irish surnames that are associated with this area are detailed below.  The numerous matches to O’Garas, O’Haras, and Mays indicate that my Genetic Homeland (orange broken circle) is found just east of Tobercurry in South Sligo. It is in this area that one finds a castle, placename and farmer cluster associated with the surnames that appear as genetic matches dating from the time when surnames became common. Green balloons = farmer clusters, Green pins = O’Gara and O’Hara Castle locations, White pins = placenames. 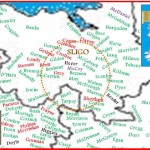 Candidate surnames for my founding ancestor. Irish surnames can still be found concentrated in the areas where they first appeared. This image shows the surnames associated with my Genetic Homeland (orange broken circle). It is interesting that May occurs at the centre of this area. It could indicate that my direct male ancestor was an O’May.

Chronological time frame
800-1000AD: Paternally inherited surnames become common in Ireland. My ancestor lives in South Sligo surrounded by male relatives. A limited number of surnames including O’Hara, O’Gara, and O’May arise among these related males.
1154–1189AD: Henry II grants lands in Antrim to the O’Haras. Some of the O’Haras and presumably their followers (with surnames like O’May and those identified in Figure 8) accompany the O’Haras to Antrim.
1259AD: First Scots Gallowglass arrived in Ireland
1560-1571: Scots MacAlisters occupy Kilbane Castle close to the O’Hara territory
1400-1600: A non-paternal event takes place which results in my paternal ancestor becoming a MacAlister.

The question I was asking myself after I received this report was – where do I go from here.  I needed to establish a link somewhere that suggests a connection between O’May and McAlister.

Literally within days I received an email from the O’May families in Maryland and New Jersey telling me they had discovered a document that linked an O’May to a McAlister.  They had discovered a web site www.ralstongenealogy.com/index.htm which is owned by Harold Ralston in Wisconsin.  This an excellent and very interesting web site and one of the documents stored there is called “The Omeys” by A.I.B. Stewart which can be found at www.ralstongenealogy.com/number13kintmag.htm

The Omeys were from Kintyre and became the O’Mays or Mays in time.  In this document, there is a reference to James Omey Junior being married to Barbara McAllester in the mid 1600s.  And Kintyre is visible from the McAlister’s castle on the far north of Ireland.  I am not going to repeat here what is in that document but it is fascinating reading for people interested in the O’May line.

So now I have a connection – but where to from here.  I guess the task in hand now is to try and build as complete a family tree as possible to see where it leads me to.