I am building a family tree for Anne Ramsden who lives in Melbourne.  Her father was a Jeffery and her mother was a Holmes.  So far I have most of her lines going back a long way except – ironically – for the Jeffery and Holmes lines which have hit a dead end.  So far I have the Jeffery line back to Thomas Jeffery 1784-1841.  That’s not a bad achievement but I’m sure I can do better.  And this is the one line I really want to extend for this lady.

The English Jeffery (and name variations) families were widespread but tended to be mostly in the South of England.  In this case, Sussex predominates.

His marriage record that I found at the SFHG – 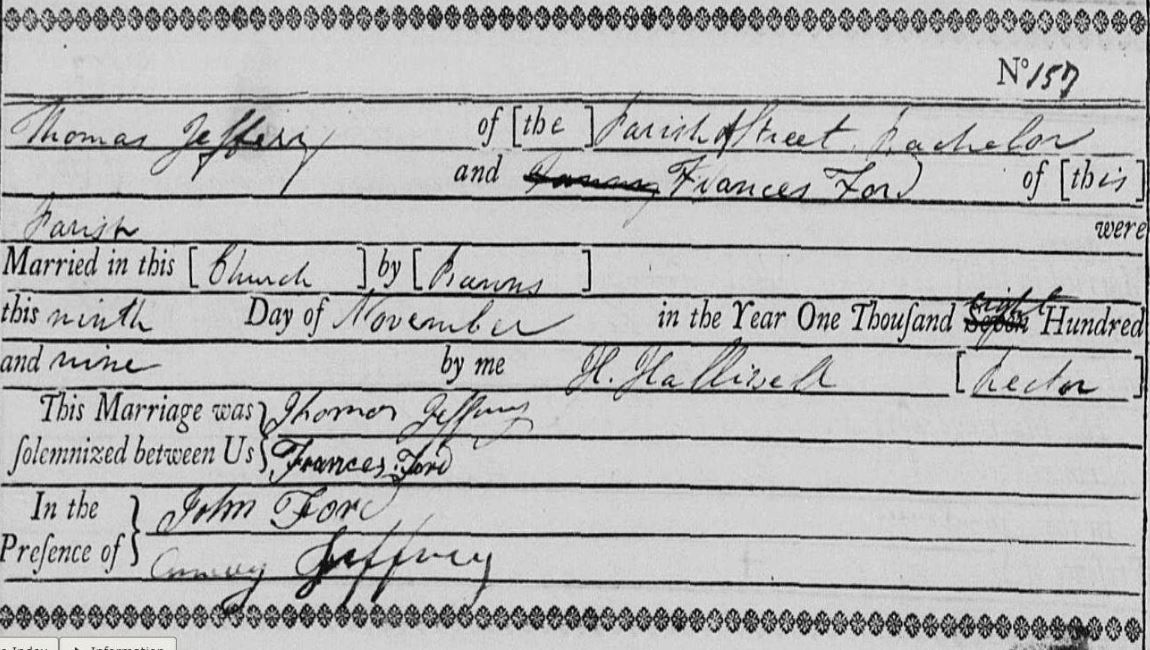 Just to add to the confusion – there is also a parish by the name of Street in Somerset – a mere 160 miles away from Streat in Sussex!

Various suggestions are that in those days people didn’t travel far because there were no cars or trains – it was horse drawn transport or Shanks’s pony.  But it is my opinion that some did – either because they needed to find work, or perhaps had fallen foul with the law or because of family problems and so forth.

So I don’t know whether Thomas was born in Sussex or a neighbouring County, and I am yet to confirm the date as 1784, but it has to be around that time.  But I do have evidence of his marriage to Frances (Fanny) Ford in Keymer, Sussex on 9 November 1809 and of his death in Keymer, Sussex on 17 February 1841.

I decided that perhaps Thomas was born somewhere else in Sussex but where?  I subscribed to the Sussex Family History Group and have spent many hours trolling through baptismal records in villages within a reasonable distance of Streat for this Thomas.  I haven’t finished yet by a long way but I currently have almost FIFTY minor Sussex Jeffery trees – and so far I have only connected two or three of them.

The only couple so far that I feel could be Thomas’s parents are Thomas Jeffery and Mary Braysher (Brasier).

Thomas is the son of Henry and Susan Jeffery and was baptised in Keymer on 28 December 1758.

A reliable source has Mary being the daughter of John Braysher and Ann Gibbs and she was born 22 May 1760 possibly in Plumpton or Wivelsfield.

It would appear that Thomas and Mary Jeffery had six children I can verify with some level of confidence   None of them are named Thomas.

Did the Jeffery’s practice some early form of birth control?  Did one of them have minor issues?  They didn’t have television or Facebook to distract them.  Or did they pack up and move after William was born for some reason and had one or more children where they moved to?  And one of them could have been Thomas?  And then maybe they moved back to Clayton before Mary was born?

This scenario appeals to me but I haven’t been able to find any reference to him elsewhere in Sussex at the moment.  And there are a lot of records still to be checked.

IF – if our Thomas is not the son of Thomas Jeffery and Mary Braysher and if I can’t find him anywhere in Sussex, then maybe he was born in another County and moved to Sussex as a young man.

I guess Kent is the favourite County followed by Somerset, Dorset and Surrey.  That’s a lot of records!