Cornelius Joseph Cummins is John Bartels paternal grandfather.   What we now know of him and his ancestors as at 21 April 2014:

Around 1905 he was living in Cottage Grove, Oregon and had a relationship with Mary Ann Bartels, born 1880.  They didn’t marry but Mary Ann had a child called John Cornelius.   Mary Ann later married Fred Harrison Brown in 1917 and had three more children.  I don’t know under which surname Mary Ann recorded the birth of her first son with Cornelius Joseph Cummins,  if it was recorded at all but I have seen records listing John Cornelius as Cummins, Bartels and Brown.  He did in fact grow up as John Cornelius Bartels and became a dentist in Oregon.

Cornelius Joseph Cummins’s parents were John Cummins, born 1838 in Ireland, and Catherine nee Holland born 1847 in Ontario, Canada.  They married on 27 July 1869 in Ontario.  Catherine’s parents were Cornelius Holland and Elizabeth McCarthy.  On the marriage record – see below, John Cummins is recorded as John Cummings and his parents were recorded as being  Denis and Mary Kehoe.  I initially took that to be Denis and Mary Cummins (nee Kehoe).  But after searching through the Irish web sites, I have not been able to find any reference to a marriage between a Denis Cummins and a Mary Kehoe anywhere in Ireland.  But of course, that doesn’t mean to say there wasn’t one.

There are four entries on the page below for four different marriages and in each case, the celebrant has recorded the names of the parents of the bride and groom in full – i.e. christian name and surname for both parents with the mother’s name being her maiden name.  The exception being the last entry for John Cummins – recorded as Cummings – so is it Denis Cummins and Mary Kehoe or is it Denis Kehoe who married a lady by the name of Mary – maiden name not known at this juncture?   Did she already have a son whose name was John Cummins when she married Dennis?  As Mary Ann Bartels did when she married Fred Brown.  Dennis (or Denis) and Mary are listed as being from Wexford, Ireland.  So far I have been unable to find any trace of them.  And because the celebrant recorded Denis and Mary as being from Wexford Ireland in parenthesis, it is reasonable to assume that they most likely were still in Ireland at the time of the marriage.  And I guess it is possible they may have gone to America later. 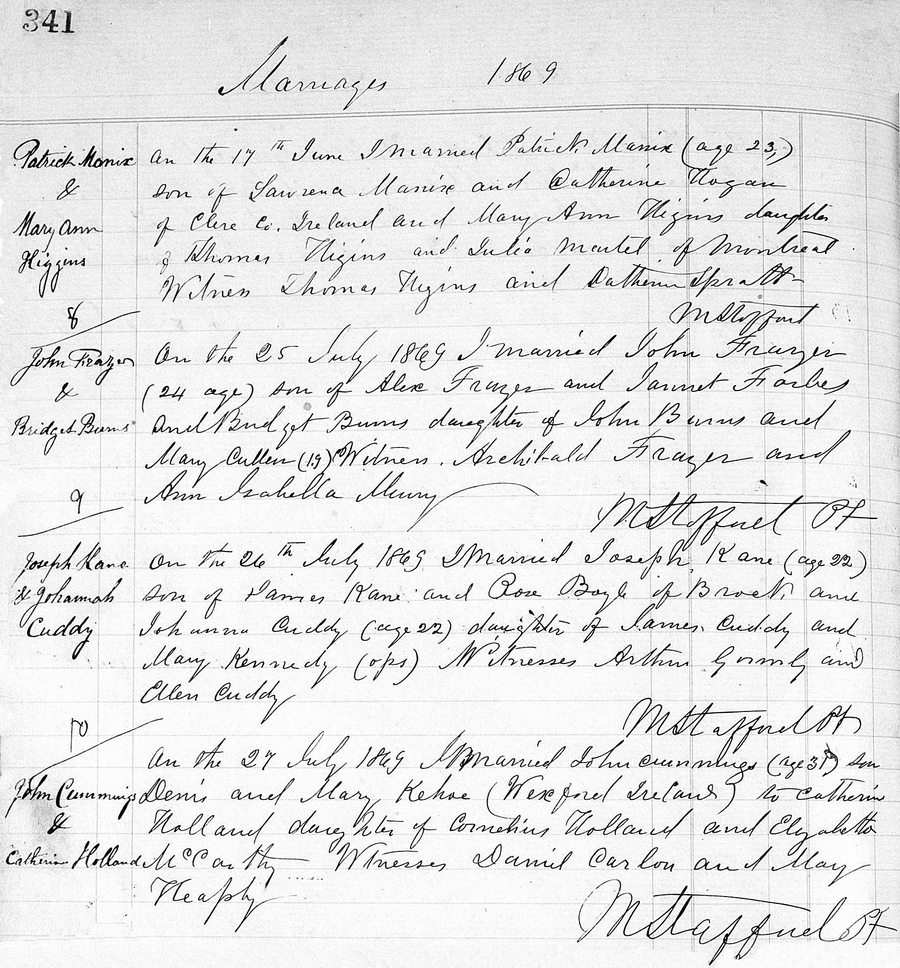 All conjecture and a tad “pie in the sky” but I am focussed at the moment on Denis being a Cummins with Kehoe as a slim possibility.

One record I discovered suggested that Cornelius’ father John Cummins had a brother James, born 1839 and a sister Ellen born 1847.  But I am not sure about it.

What is interesting is that although Cornelius Joseph Cummins didn’t marry Mary Ann Bartels, it would appear that their relationship didn’t last very long because on 16th September 1905, a marriage licence was issued to Cornelius Joseph Cummins of Cottage Grove Oregon and Erna Pearl Dawson of Etna, Siskiyou County, CA.  See below.  John Cornelius Bartels (Cummins) was born just a month later. 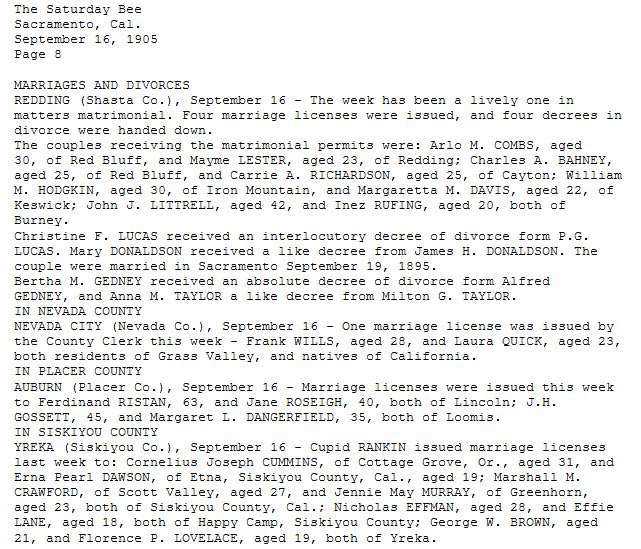 Cornelius and Erna had two children as far as I can ascertain – Kathleen born in 1914 and John born in 1917.

After Cornelius died in 1935, it would appear that Erna returned to Oregon and there is a record in the US 1940 Census that lists Erna as age 53, widowed and resident at Ward 4, Eugene, Eugene Election Precinct 14, Lane, Oregon and that she was a housekeeper to WL and Marguerite Davis.  It also lists her birthplace as California and her last known residence as Vancouver, British Columbia, Canada.